HOUSE WITH A WINDOW IN MNICHOVICE

A romantic family house from the 1930s is situated on a corner plot of land near the railway. Dwelling rooms of the house originally situated on the side facing the street were isolated from the garden. Therefore, the main task faced by the designers was to connect the house with the garden visually and physically. The reconstruction therefore involved a radical intervention – cutting out a wide opening (an image of the landscape) into one of the walls. The interior became brighter, lighter and airy and its atmosphere improved. A small window in the corner of the glazed surface opens to let the scents and sounds of the garden inside the house. A new entrance with a concrete staircase was constructed in the corner of the room. The interior is constructed entirely from OSB polished boards and expands through the inner parts of the house like an artificial landscape. 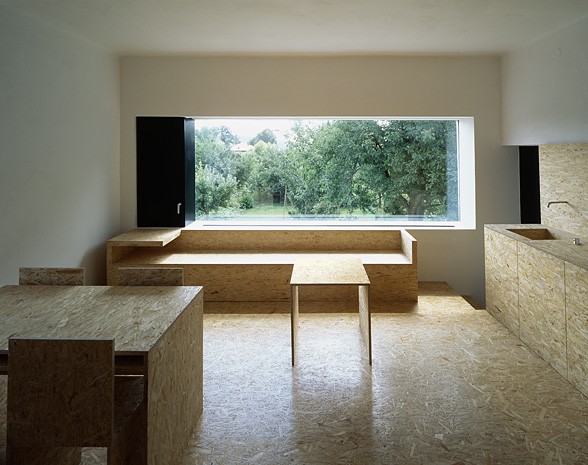